March 2014
The Extensive Reading Program (ERP) in Nepal began in the spring of 2014 in conjunction with a university-sponsored volunteer service and study tour. We solicited book donations from publishers, booksellers and school libraries several months prior to the trip and were able to collect over 2000 books including many graded readers. The books were sorted into five ‘ER Kits,’ which also included a basic guide to ER, reading record sheets and summary/impression forms – everything necessary to get started.
One kit was brought to each school and the teacher-trainers held workshops with the Nepali teachers followed by reading sessions in the classrooms. The local teachers made the decision on which grade to begin the program as they were much more knowledgeable about the overall English levels of the students. In one community we held a workshop with 6 teachers from two schools. Classroom practice went well with one of the schools while the other school proved a bit more challenging as the teachers in attendance at the workshop were not the teachers in the classrooms, making it difficult to apply the approach to reading in the classes. In hindsight, it is likely that the classroom teachers were not made aware of the program and had merely expected another one-off class by volunteers passing through the schools. This breakdown in communication had an impact on how the program was received by the students and in the school as a whole.
By the end of the trip we had distributed four of the kits to four schools in Kathmandu Valley. The fifth kit was slated for an orphanage but was determined to be difficult to implement so the books were absorbed into the other program kits. In total, each school received well over 300 books.

The lessons learned from the first foray
The students can decode and sound-out words quite well as was evident when reading aloud, a practice followed in all the schools to aid in pronunciation and oral reading fluency. We did find, however, that they often did not comprehend the material. Thus, finding the appropriate reading level became the first hurdle. We suggested that they read silently as a way to internally focus and improve comprehension. However, sustained silent reading was quite challenging, especially in the lower grades. The classroom would start off silently but within a few minutes a low murmur would begin, slowly increasing in volume and culminating in a cicada-like crescendo until the teacher reminded them with a gentle “Shhh.” And this would then start all over again. Many of the students seemed to think that if they can read it aloud, then they understand it.
The students needed the space to familiarise themselves with the books. For many, if not most, this was their first time to see such an abundance and array of colourful and interesting books and they needed the time to just feel them and look at the pictures. It was too much eye candy all at once. In our haste to introduce and pilot the program quickly due to time constraints, we failed to recognise this very basic need.
The administration and the teachers welcomed the books, the workshops and the professional development opportunities. The tenets of ER, which by its very nature focuses on student autonomy and choice, was quite new for the teachers and seemed to create some space for the teachers to revisit the objectives of reading in the language classroom. The idea of teachers as facilitators, guides and role models in an ER session was met with sometimes bemused but more often with very keen interest. 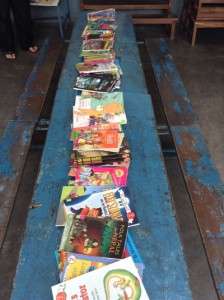 We made a follow-up trip to the schools this fall. This time, however, rather than attempting to bring books, we created a book fund and with the support of the ER Foundation grant we were able to purchase close to 700 readers in Kathamandu at a fraction of the cost of buying in Japan. Purchasing locally also allowed for the inclusion of books by local and regional authors and Nepal-specific folk tales and stories; deemed necessary for a more culturally balanced selection. The books were slated for distribution in three target schools that had indicated a commitment to the ERP for at least 6 months. We were able to infuse the three schools with more sorely needed books as the students were reading, and as we were soon to discover, reading a lot. 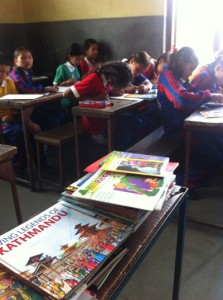 Returning to one community, we conducted a 4-hour marathon teacher workshop inviting teachers from two schools to discuss the progress of their respective programs. We reviewed some ER principles, had the teachers lead a session on determining reading levels, suggested a variety of reading promotion activities and most importantly engaged in a feedback session on how the program has been progressing in the six months since initial implementation. The most encouraging comment was that the books have been helping not only the students but the teachers as well. They enjoy the books as much as the students and find the time spent reading in class to be time well spent. One teacher commented that he was initially quite skeptical of the program but having seen the attitudinal changes in his students regarding ER, from initial collective groaning to now eager anticipation, has convinced him that this type of reading time should be an essential part of their English lessons. The only problem at that moment was the need for more books. This enthusiasm was evident when we visited the classes the following day.

The next day we delivered the new books, observed the ER sessions and conducted a survey to determine reading speed and comprehension for all grade 5 classes. Teachers also requested the survey to be conducted in other grades that were just beginning to introduce ER. The teachers and the administration seem interested in any evidence of improvement in language skills and development pre- and post-ER. Progress will be monitored in six months in March 2015 with a follow-up survey and another infusion of books.

The ERP in Nepal has gotten off to a good start in its first year. The objective has been to introduce and maintain a system that helps learners develop their language skills through the language of books. We are attempting to support the local economy and the local communities through this small-scale educational initiative by empowering the teachers with the skills and knowledge to implement ER and to help their learners achieve better and more. This is an on-going project. If you are interested in supporting it, please contact the author at amayeda@konan-wu.ac.jp. 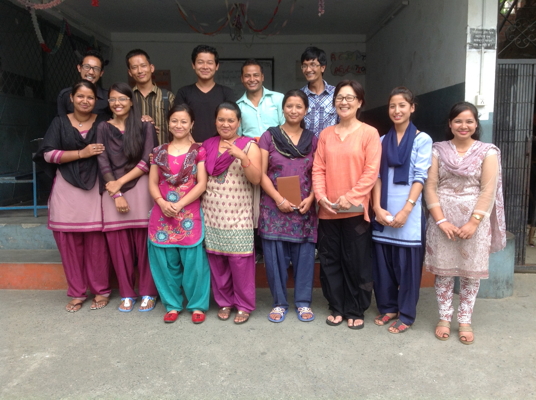 Sincere appreciation to all those who have supported this initiative: Randy Bollig, NPO Family & Friends Project; Elisabeth Fernandes, James Crocker and Charlie Bean for their work in introducing the program to the schools in March; englishbooks.jp, Pearson Japan, Booksmart, Marist Brothers International School, ABAX and Konan Women’s University for book donations; the Konan Women’s University volunteer study student-participants and Georgette Kawaii for transporting the kits from Japan and helping in the classrooms; Cathay Pacific Airlines for the generous baggage allotment; the ER Foundation for supporting the local purchase of books; and Catriona Chalmers Takeuchi for assistance during the September follow-up sessions.

Ann continues to be active in Nepal.  See her report of the first Extensive Reading Symposium in July, 2019.